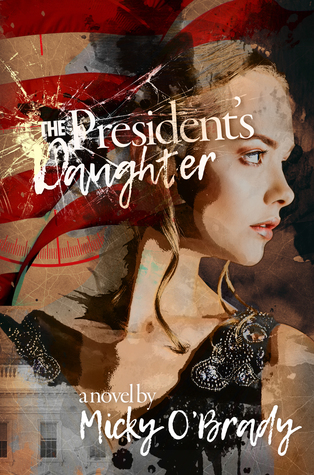 Summary:
When her father is elected President, seventeen-year-old brainiac Alix Forrester is recruited into a covert branch of the Secret Service. They expect geeky, socially awkward Alix to be their inside girl, keeping an additional eye on her father without his knowledge—even though she and the President barely get along after a car accident that left her on crutches and kept her out of Harvard. If it wasn’t for Sam, Alix’s long-term crush and her father’s young personal assistant, her life would suck at an epic level—at least until she starts training with twenty-one-year-old Secret Service-genius Ian.

Their geeky connection over all things science has Alix crushing hard. As her injuries heal, Ian molds Alix into an elite spy. Their attraction grows, while the relationship with her father is going down hill: he even throws her out of the Oval Office in front of everyone. No matter what, when a series of assassination attempts threatens the President’s life, Alix and Ian get activated.

Rejected by the man she’s trying to save Alix hunts for the assassin, inadvertently handing Ian evidence pointing to Sam as the perpetrator. Despite her protests and pleas Ian has Sam arrested, ordering Alix to drop the case. Hurt by Ian’s actions Alix goes rogue to prove it can’t have been Sam. The boy who kissed her for the very first time cannot be out to kill her father. Racing against time Alix must overcome her own inadequacies and find the true assassin before Sam gets convicted for something he didn’t do—or before the President gets killed.

I went into “The President’s Daughter” expecting that it would be somewhat similar to one of Ally Carter’s books like “Not If I Save You First” or maybe “The Gallagher Girls” series, however that wasn’t the case. “The President’s Daughter” was different and it seems to be more like a generic YA novel. My definition of generic YA is when a YA novel contains tropes often found in MANY YA novels. I’m not saying this is a bad thing but the tropes presented in the novel weren’t exactly my favorites. Actually I dislike some of these tropes. Examples were:
1. Girl on girl hate: This is spoilery so I’m not going to talk about this but Alix has competition.
2. Ridiculous love triangle: Alix likes Sam but she thinks Sam likes Gianna. Then Alix likes Sam but she has conflicting feelings for Ian (her instructor) who also happens to be an adult. Sigh.

Additionally, there was so much drama in this book. The protagonist tends to create the drama since were reading the story from the perspective of a teenager. However, I just wasn’t expecting a girl with an IQ of 160 to make sweeping accusations as long as it’s not about her childhood crush, Sam. I expected her to be different because she was smart (according to her IQ score). Unfortunately, she was just like any other teenager I usually read about in YA novels. For instance, she doesn’t seem to be making rational decisions and she acts before thinking or assessing a situation. While she knows how to code and was knowledgeable in other areas like science and math, she had poor decision making skills.

I also dislike the idea of ‘fixing’ the main character. I know there are some people out there who can relate to Alix regarding this issue. In real life there is no such thing that could magically help someone walk this fast. I know this is just fiction but it would’ve been nice to read about a disabled main character that could still succeed even if she was on crutches.

What I liked in the novel was the development of Alix’s relationship with her father and the novel’s interesting premise.

Overall, I neither like nor dislike this book. I was completely engrossed in the story but there was a moment when I wanted to quit reading. Sometimes I just couldn’t stand Alix’s POV and instead I decided to skim it. It was frustrating but at the same time, I couldn’t put the book down.

*Huge thanks to the publisher for approving my request to read this book in exchange for an honest review. All thoughts are my own!