Thanks to this book I’m now in a book slump. Also, leave if you haven’t read the book. Otherwise, you will be spoiled! 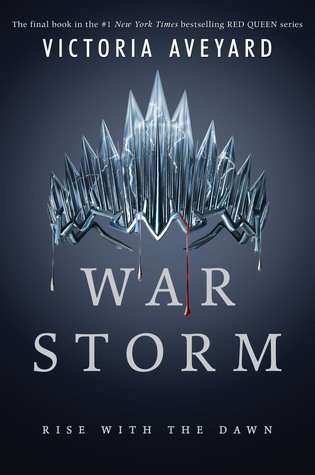 Summary:
VICTORY COMES AT A PRICE.

Mare Barrow learned this all too well when Cal’s betrayal nearly destroyed her. Now determined to protect her heart—and secure freedom for Reds and newbloods like her—Mare resolves to overthrow the kingdom of Norta once and for all… starting with the crown on Maven’s head.

But no battle is won alone, and before the Reds may rise as one, Mare must side with the boy who broke her heart in order to defeat the boy who almost broke her. Cal’s powerful Silver allies, alongside Mare and the Scarlet Guard, prove a formidable force. But Maven is driven by an obsession so deep, he will stop at nothing to have Mare as his own again, even if it means demolishing everything—and everyone—in his path.

War is coming, and all Mare has fought for hangs in the balance. Will victory be enough to topple the Silver kingdoms? Or will the little lightning girl be forever silenced?

In the epic conclusion to Victoria Aveyard’s stunning series, Mare must embrace her fate and summon all her power… for all will be tested, but not all will survive.

Well, this book drove me crazy just by thinking about how it was going to end. It was fast-paced but political intrigue, deceptions, and betrayals were still in the very foundation of the story. I mean, it was also a running theme for the entire series so I’m not that surprised.

I think I experienced a lot of feelings, a whirlwind of emotions while reading the novel. This made my reading experience quite enjoyable. I was so frustrated. I loath the fleeting feelings of teenage romance, the threat of death looming over their heads, and the constant hesitation (will they/won’t they) throughout the book. After a while, it gets tiring.

If you’re feeling quite hopeful, don’t expect anything from this book. Don’t say I didn’t warn you. The author had already made it clear on her tumblr. If you follow her there (just like I do), you’ll know (objectively) the side of the author especially when it comes to the romance in the novel.

I’m still unsure what I feel about this huge novel, to be perfectly honest. I can’t say I’m unsatisfied but I wasn’t satisfied either. One thing I’m looking forward to didn’t happen: A face-off between Cal and Maven. Instead, you get Cal vs. Iris and Mare vs. Maven. The book had so much potential to keep me at the edge of my seat. I was pretty excited going through the novel because of my expectation/s. Unfortunately, it didn’t happen. I only expected ONE thing and it didn’t happen. I mean, it doesn’t need to happen but it would’ve been great, plot wise.

Character development was phenomenal on Evangeline. If she’s your fave, you need to read this book. I liked her character in the novel and I wished there was more content from her.

As for the main characters:
– Mare: She was less annoying in this book. In fact, I liked her so much in this book. She was mature in here compared to the previous novels.
– Cal: FRUSTRATION, I tell you!
– Maven: He was like Joffrey from Game of Thrones meets Kylo Ren from Star Wars meets Draco Malfoy from Harry Potter, except he was more like, “My mother will hear about this” even if his mother was no longer around. Get it?

I was upset with Maven’s characterization. There wasn’t enough of Maven content. It was mostly about war, politics, and Cal x Mare romance. There should’ve been less romance content since they weren’t even going to be together in the end, but whatever.

Maven’s character could’ve been explored more. Instead he was reduced to “just crazy and irredeemable.” Meanwhile, Evangeline gets out unscathed as if she had no choice at all with the life she was living. When you actually think about it, Maven didn’t have a choice either. Elara messed with his mind and even when she was dead, Maven could still hear the voice of his mother. The only thing that helped him was the silent stone, which was like a drug to him, to silence the whispers of his mother.

Anyone can argue that Maven still chose the wrong side at the end of the book compared to Evangeline who just wanted to escape from the war. However, Evangeline didn’t succumb to hearing Elara’s whispers. Never forget that Evangeline did murder many people and she was a bully as well. They way I see it, she was finally rid of her tormentors: her parents. And now Evangeline was a special guest in Montfort because she was ‘brave’ to step away from the Silver life. Well, it was easy to make that decision if Evangeline’s character did not constantly hear voices that weren’t actually there. All I’m saying is that, I didn’t like how Evangeline didn’t get reprimanded for her past actions. Both her and her brother did not face any consequences for their actions. Instead, they acted high and mighty even before they left Cal and the rest to fight against the Lakelanders.

The worst part was when Cal (and even Mare) decided whether Maven could still be “saved.” They based it on the sassy conversation they had while an audience was watching. As if the public conversation would be an indicator of whether Maven could still be saved. They do know that Maven always tried to appear tough especially in front of an audience. He tends to be careful not to show signs of weaknesses. Finally, there wasn’t even a Maven POV of this scene. Every POV would always describe Maven as the bad guy. Hence it would seem that Maven was reduced to nothing but a villain. Don’t even get me started when Mare even thought about Maven after she had killed him. She thought about whether Maven was truly gone or if he could still be saved. THIS HAPPENED AFTER SHE KILLED HIM.

“Or maybe we were wrong. Maybe he could have been saved somehow. Maybe I’m just a murderer too.”

“Only one thing is certain. We will never know.”

The ending leaves a lot to be desired, mostly because I wanted more from the story. It’s like my excitement was an all time high and then it plunges down leaving me with more questions than answers. If you’re looking for closure, this book ain’t for you. My tentative rating for now is a solid 3.7/5. It wasn’t bad per se as I liked it a lot more than the previous novel.

Anyway, here were some of my predictions based on my King’s Cage review:

I’m just going to leave this here. #1 did not happen and #2 did happen.

What did you think of War Storm?