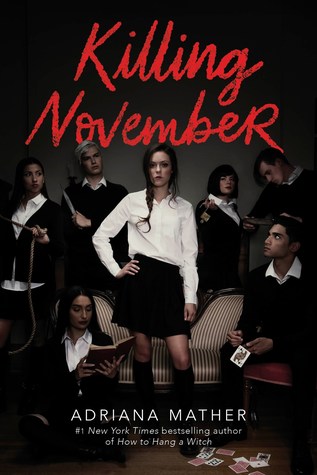 Summary:
November is trapped.
At the mysterious Academy Absconditi, a school that’s completely off the grid, there’s no electricity, no internet, and a brutal eye-for-an-eye punishment system. Classes include everything from knife-throwing and poisons to the art of deception. And the other students? All children of the world’s most elite strategists, in training to become assassins, spies, and master manipulators. November Adley doesn’t know why she’s been sent to this place, or the secrets that make up its legacy, but she’ll quickly discover that allies are few in a school where competition is everything. When another student is murdered, all eyes turn to November, who must figure out exactly how she fits in before she is found guilty of the crime…or becomes the killer’s next victim.

Like Adriana Mather’s previous novels, Killing November follows a generic YA format where the main character is absolutely clueless (I mean, she still doesn’t know anything at 76%) and she goes through a journey of figuring out her role in this strange and new school environment. Throughout most of the novel, November was a passive character trying to figure out the school, its students, and where she fits.

“November Adley doesn’t know why she’s been sent to this place, or the secrets that make up its legacy…”

Mather’s protagonist manages “to wing” her way through her dangerous classes. At the same time, you can’t call November a mary sue because she had been taught sleuthing and knife throwing (just to name a few) and it helped her in her classes. The italic passages in this book explained her past, as if the main character was reminiscing about her past experiences) and how her father just conveniently taught her things a normal teenager wouldn’t actually be expected to learn. The transition can be jarring at times and I can’t help but wonder what she was doing while reminiscing about the past.

After reading through a bunch of chapters (and some murders), I can’t help but feel that this story could be too contrived for my reading tastes. Also, November’s a teenager girl who sort of just knows the etymology of names. She can tell you where it originates and what the name means.  An example is when she meets someone in her school (that may or may not be their name), she makes assumptions about them based on their names. I don’t remember if she had a backstory for this one. This is also one of my unanswered questions from the novel.

Additionally, there were other unexplainable parts in the novel that made me question about the school. For instance, where do the students go when they leave school (when punished)? This question wasn’t even addressed by the end of the novel. In fact, the story ended abruptly which left me feeling unsatisfied.

Needless to say, I did not enjoy reading this one as much as the “How to Hang a Witch” series. And although I did not care for any of the characters, I felt that the side characters were a lot more interesting compared to the main character. However, I’d still give this book 3.5/5 because I felt that this book can be an enjoyable read for many. Even if this had not been the case for me, I think teens will like this one because of the mystery, the high stakes, and the secret societyesque school inhabited by vicious students.

**Huge thanks to the publisher for providing access to this book in exchange for an honest review. All thoughts and opinions are my own!

Thanks for stopping by & happy reading!

One thought on “Review: Killing November by Adriana Mather”