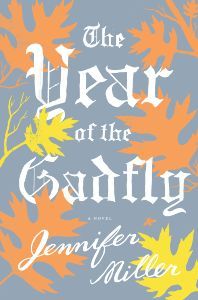 The Year of the Gadfly by Jennifer Miller
Publisher: HMH Teen
Published: 05/08/2012
Format: Hardcover
My rating: 3 of 5 stars

Summary:
“Do you know what it took for Socrates’ enemies to make him stop pursuing the truth?”
“Hemlock.”

Storied, fiercely competitive Mariana Academy was founded with a serious honor code; its reputation has been unsullied for decades. Now a long-dormant secret society, Prisom’s Party, threatens its placid halls with vigilante justice, exposing students and teachers alike for even the most minor infraction.

Iris Dupont, a budding journalist whose only confidant is the chain-smoking specter of Edward R. Murrow, feels sure she can break into the ranks of The Devil’s Advocate, the Party’s underground newspaper, and there uncover the source of its blackmail schemes and vilifying rumors. Some involve the school’s new science teacher, who also seems to be investigating the Party. Others point to an albino student who left school abruptly ten years before, never to return. And everything connects to a rare book called Marvelous Species. But the truth comes with its own dangers, and Iris is torn between her allegiances, her reporter’s instinct, and her own troubled past.

The Year of the Gadfly is an exhilarating journey of double-crosses, deeply buried secrets, and the lifelong reverberations of losing someone you love. Following in the tradition of classic school novels such as A Separate Peace, Prep, and The Secret History, it reminds us how these years haunt our lives forever.

I thought this book was a solid read, however there were some plot holes that weren’t addressed or brought back again. The story was told through two timelines: two pov’s were from the recent timeline (Jonah and Iris) and one pov was from the past (Lily). The narrators all seemed unreliable, except Iris.

I’ve been thinking about what lead me to rate this book 3 stars, I think it was mostly because of the pacing, its characters (more like caricatures), and the fact that I just wasn’t satisfied (overall) with this novel. I still can’t exactly pin-point what didn’t work. I think it was the end result (this book) or the culmination of what I didn’t like all that much which lead me to rate this 3 stars.

I thought I would love this book and give it 4/5 but after careful thought, this book seemed subpar. This one reminds me of School 2017 (Korean drama) but set in the 90’s + with the added elements of a secret society. If this sounds interesting, then this is probably for you. Just don’t compare it to The Secret History.

This book was definitely interesting in the beginning. You have a main character who has their own quirks (they struggle to fit in and constantly speak to someone in their thoughts). She also had a weird student-teacher relationship (nothing romantic, don’t worry) with Jonah. I can’t tell if Iris had a crush on Jonah, although it was slightly disturbing when he noticed her boobs. But what’s interesting in this book was reading about their thoughts towards each other.

The romance in this book was another factor I didn’t like. Mostly because there really wasn’t any romance in the first place (except the past timeline) and it just felt out of place. For instance, the romance between Jonah and a former classmate seemed kind of “forced” (in my opinion). It made it seem like Jonah was a caricature of Tom in 500 Days of Summer but then his object of desire was like a femme fatale type of character. Overall, not a really good combination.

After reading the entire novel, I felt like I wasn’t interested in the mystery. Additionally, I also felt that I didn’t care for any of the characters. The last few pages kind of wraps everything up (but it depends on the reader’s perception), however it just wasn’t a satisfying read for me. I mean, I did like it (hence the 3 stars) but I didn’t love it enough to give it 4 stars.

I’m not sure if I want to recommend this book either because I feel like this one’s going to be polarizing for many people. You’ll either love this or hate this but you’ll definitely stay for the aesthetic™️.

Thanks for reading and I hope you all have a nice day!

One thought on “Library Haul: The Year of the Gadfly by Jennifer Miller (REVIEW)”