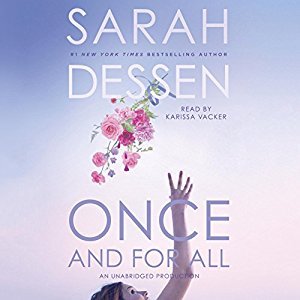 Once and for All by Sarah Dessen
Publisher: Viking Books for Young Readers
Format: Audiobook
My rating: 2 of 5 stars

Summary:
Is it really better to have loved and lost? Louna’s summer job is to help brides plan their perfect day, even though she stopped believing in happy-ever-after when her first love ended tragically. But charming girl-magnet Ambrose isn’t about to be discouraged now that he’s met the one he really wants. Maybe Louna’s second chance is standing right in front of her.

Sarah Dessen’s many fans will adore this latest novel, a richly satisfying, enormously entertaining story with humor, romance, and an ending that is so much more than happily ever after.

Execution is still much better than Save the Date. But unfortunately, I still I feel like there are some parts in this novel that I find to be less compelling.

Even worst is that I found her past to be some kind of quick insta-lust. I don’t exactly remember how it all happened but (highlight for spoiler): did she have sex with Ethan on the first date? Pls tell me I’m wrong. I’m sorry for judging but what was going through her mind? Anyway, I just can’t buy it. Was this all planned? (highlight for spoiler): Did the boy even have protection with him? Basically, I wasn’t buying the romance.

Second, I don’t think I’m a fan of how the hate-love relationship progressed throughout the book. It made it seem like Ambrose’s character “changed” and it also seemed that the main character quickly got over her past trauma while not handling the issue in the first place: the dating dare Ambrose did with her. What the heck, i’ll just spoil it (you guys should have read this one by now): Basically, the dare was about Ambrose committing to dating one person while the protagonist dates different people. They switched because for whatever reason, this seemed like a “cool” idea just to prove something ridiculous. Anyway, in the end, the main character realizes that she was wrong about her decisions who to date. She now cheats on her supposed “boyfriend” during the dare. And correct me if I’m wrong: no one said (when the dare was made) that she’ll actually make one of her dates a boyfriend. The dare was supposed to be about the main character dating freely with basically anyone. I don’t know, I am confused.

In a nut-shell: hate to love relationship, wedding plannings, dares, insta-love but tragic backstory (which I didn’t find compelling), and the serious topic from the back story (highlight for spoiler): school shooting became sort of less serious due to how it was presented in the novel. I liked some parts more than others.

2 thoughts on “Library Haul: Once And For All by Sarah Dessen (REVIEW)”